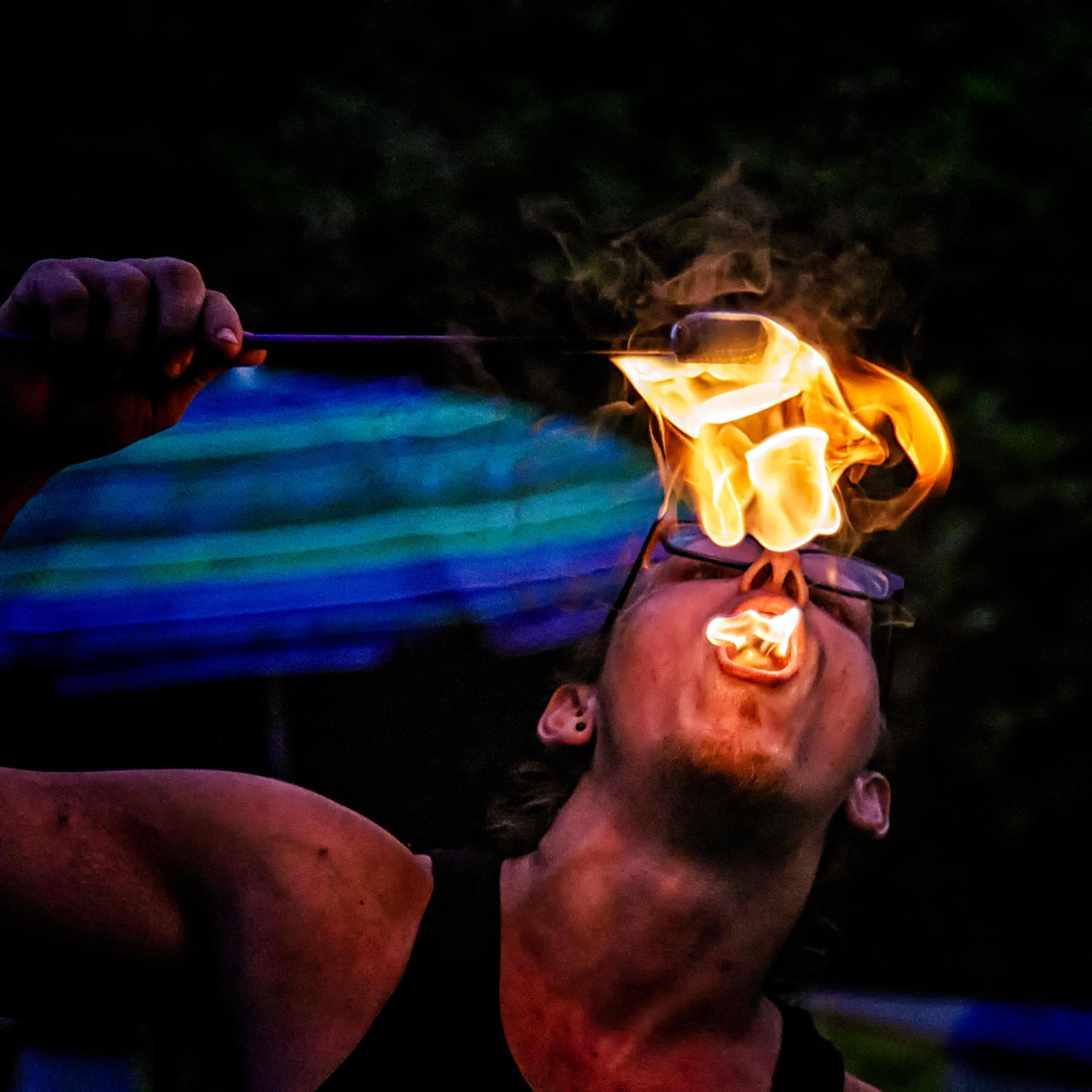 Q – What’s a surprisingly good technique I can use to photograph fire performers?

In Part One of this series on improving your fire performer photography, we looked at using concepts from photojournalism to keep the focus on the human performer. In Part Two we looked at Always Getting Consent and Safety Third. Fire performers are not props. They’re human. Treat them that way. For Part Three, we looked at Basic Rifle Marksmanship. A camera is no different, conceptually, from a rifle. In Part Four, combat shooting, er, improving photography with Shoot, Move, Communicate. In Part Five, even boredom and creative ruts can be effective photography tools.

Today, we’ll take a fairly high level look at how camera settings interact with each other, and what happens when you don’t fully think through what you’re trying to do. This is not a tutorial on how your camera works.

Generally speaking, shutter speed will control the size of the plume or length of the trail. The longer duration your shutter is open then the flame that gets recorded will be larger. Because light from the flames will also be, in most cases, your key-light, the slower the shutter the more you risk overall motion blur as well.

Aperture and ISO will control exposure. The smaller the aperture, and the lower the ISO, less details will get blown-out to white in the flames and the darker the photo will become at a given shutter speed.

This is, usually, where I see most people stop. Once they record super detail in the flames they feel that they nailed the shot, regardless of how badly they under exposed the photo to actually get there. The flame, and lust to capture “SIIIIICK” texture overrides all other considerations, including the human element.

Think of it this way: Imagine a photograph of, say, Thomas Edison, standing next to a brightly lit light-bulb with his hand holding the lamp, and the exposure on the light-bulb is SO good that you can see all the details of the tungsten coil wire, even as it is glowing yellow-hot. You can also see the texture to the glass bulb, but you can barely see Edison. Sure, you can see his hand holding the lamp but his arm is really dark and maybe, just maybe, you can see a hint of his face, but only if you squint.

Maybe he is a little brighter in frame but, at best, he looks muddied and muted compared to the bulb, and the details you see in the bulb are so much clearer than than the half smile he has or the texture in his exhausted brow.

Could you connect, emotionally, with that image?

WARNING – DO NOT ATTEMPT

I shouldn’t have to say this, but here we are. I am an experienced fire performer photographer. Photos taken with fire involved professional fire performers with proper fire safety training, equipment, and procedures in place.

The use of fire comes with inherent risks to life, limb, or property. Any action you take based on any information on this website is strictly at your own risk and I will not be held liable for any loss or damages you cause to yourself or others because you chose to use fire in any way.

Don’t be a bogan wook. Leave the siiiiiiiiick fire trails and fire plumes to the professionals and support them by cheering their performances in person!

For me, the flame is not the subject; the performer is. I’d rather nail the exposure, and action, with the emphasis squarely on the human being manipulating the flame than on any other element in the frame. I want to see the human, the effort made, countered with the inherent element of danger from the flames. The dance, to me, is more important than the costume. When present, the human element will always be the most important factor over anything else because people will visually connect more readily with people in an image.

Let’s take these concepts a little farther, and I am going to grossly oversimplify things to do it:

The primary effect of altering aperture is controlling the light for a given shutter speed. The iris of the lens opens more, or less. Wider aperture, brighter image; smaller aperture, darker image. Note: This is just like the pupils of an animal’s eyes in daylight or nighttime. The pupils of certain animals open wider than others. Cat’s pupils open far wider than those of humans. Think of them as having “faster lenses.” The secondary effect of altering aperture is controlling depth-of-field, the zone of focus (acceptable sharpness) from your subject. The wider the aperture, the narrower the zone of sharpness; the narrower the aperture, the wider the zone of sharpness.

Again, for most people, this is good enough. Fiddle with Aperture, Shutter, and ISO, and you’re golden.

What about distance, though? Just like Aperture, Shutter, and ISO, distance can affect the compositional side of the image. It can also have an enormous effect on exposure at the same time.

Distance, in particular, affects composition and exposure both by what exactly is visible within the frame (and the overall brightness and darkness of the frame as a result) and specifically it affects exposure due to the Inverse Square Law of Light. In the simplest of terms it means the intensity of light gets less as distance increases both from the observer and from the object being illuminated. Light from you is dimmer with distance from you. An illuminated face is dimmer with distance from you. A face is also illuminated more weakly the farther the light source is from it.

Here’s a couple of scenarios to consider:

A photo of Finlay is well exposed and bright because you balanced aperture at f2.8 on a 50mm lens with an ISO of 1600 and set a shutter of1/800th of a second to really freeze motion and bring out some flame texture. He is well exposed and the noise in the image is very low but when you look at it more closely, the closer torch heads are super sharp but his face is ever so slightly out of focus. What happened?

How about a shot of a Kendra where flame trails are long enough at a 1.3 second exposure to have recorded an interesting spiral pattern, flame textures are reasonable with detail because you waited until most of the fuel burnt off and the flame brightness died down, even at yet still have decent exposure at f5.6 because your ISO was at 800 and you were far but framed tight at about 60mm on a zoom lens and but the she is a fuzzy blob and everything else in the background looks like a wiggly mess?

How about LED flow props? (Yes, yes, LED poi is not fire performer photography, but the concepts are completely the same. The advantage to LED props is they are much dimmer and their brightness does not change much at all. Lock in exposure and you’re good from the beginning to the end of the performance)

How would you fix them?

For Finlay’s dragon staff photo, you could have been too close for the given aperture and angle, therefore narrowing the depth of field. Only the front most torches at that depth of field would have been in focus. Standing a little farther away or changing to a higher F stop would have increased the depth of field and made the angle somewhat irrelevant since DOF would have encompassed a wider area, but could also affect the exposure. Do you, then, lower shutter speed a little to compensate or reduce ISO? What if you reduce shutter speed it enough that even at 50mm, motion blur gets introduced? What if decide to avoid risking motion blur by changing the shutter speed after changing the aperture to increase depth of field but now your subject is even darker because of the aperture change? You could increase ISO, but that would push noise into obnoxious levels. Also, keep in mind the brightness of the fire prop is always getting lower and lower and that no prop will ever the same exact brightness as before. What about changing your auto-focus setting to AI-Servo and, using backbutton auto focus, prefocusing on the face, thus locking focus away from the torches? The face will be sharper, but not the torches. Would that work?

For Kendra’s photo, you could make a choice: either record trails or freeze motion. If you opt to record trails the only thing you COULD possibly do is freeze motion with flash (a powerful enough flash will freeze motion at a 1 second exposure simply because the duration of the flash can be something along the lines of 1/10000th of a second at low power). Or you could change your priority here, and opt to freeze motion — faster shutter, wider aperture (at 28mm, are you using a kit zoom lens at a max range of F3.5-5.6, another zoom lens with a 2.8-4.0 aperture, or do you have a 35mm lens at 1.4?), and higher ISO. What if F3.5 does not give you a fast enough shutter to freeze motion while keeping a decent exposure on your subject? What if an ISO above 400 is too noisy but you need 1600 at your given shutter and aperture combination to properly expose your image?

As far as the LED poi shot is concerned, using flash is no help when it is poorly bounced around a venue that is primarily black and eTTL is fooled because, well, black absorbs light. Also, optical lens stabilization makes zero difference to a moving subject. The overall exposure is fine; however, the image is awful. No one is sharp, no one is clearly visible. Just a couple of vaguely human shapes surrounded by squiggly lines but hey, siiiiiiiiiiiick patterns, and the room is bright…

What is the point to all of this? A good photograph is composed well and relies on effective use of one or two of these elements and is well supported by the rest, in order to show emotion and connect with the viewer. In order to use these different elements effectively, it takes a strong understanding of what each can do in relation to the others under fast changing conditions, incredibly variable lighting, and very little time to reach. A poor photograph, well composed or not, uses one or two of these elements and ignores the others, while failing to connect with the viewer.

Are you near Boston, MA and looking for a different kind of photographer?

Please visit my contact page and send me a message so we can get started!

Want to see more of my photography?

My portfolio features the best of my headshot, portrait, event, and boudoir photography.

Great article. As someone who is adventuring into their own photography journey I really appreciate being able to compare your settings with your photos and be able to implicate and attempt similar settings with my own camera. Keep up the great articles and tutorials!

I appreciate knowing this is a helpful series of posts! I’ve found these camera settings work more as guidelines when it comes to photographing fire performers, specifically, since the luminosity of the props is so variable.

The advantage to photographing LED flow toys is that, even though they are much dimmer than fire props, their brightness does not change and you can really lock in a consistent exposure. It’s harder to use LED props as keylights and freeze motion with them but you don’t risk blowing out highlights as easily during long exposures.

There’s always a trade off. 😀