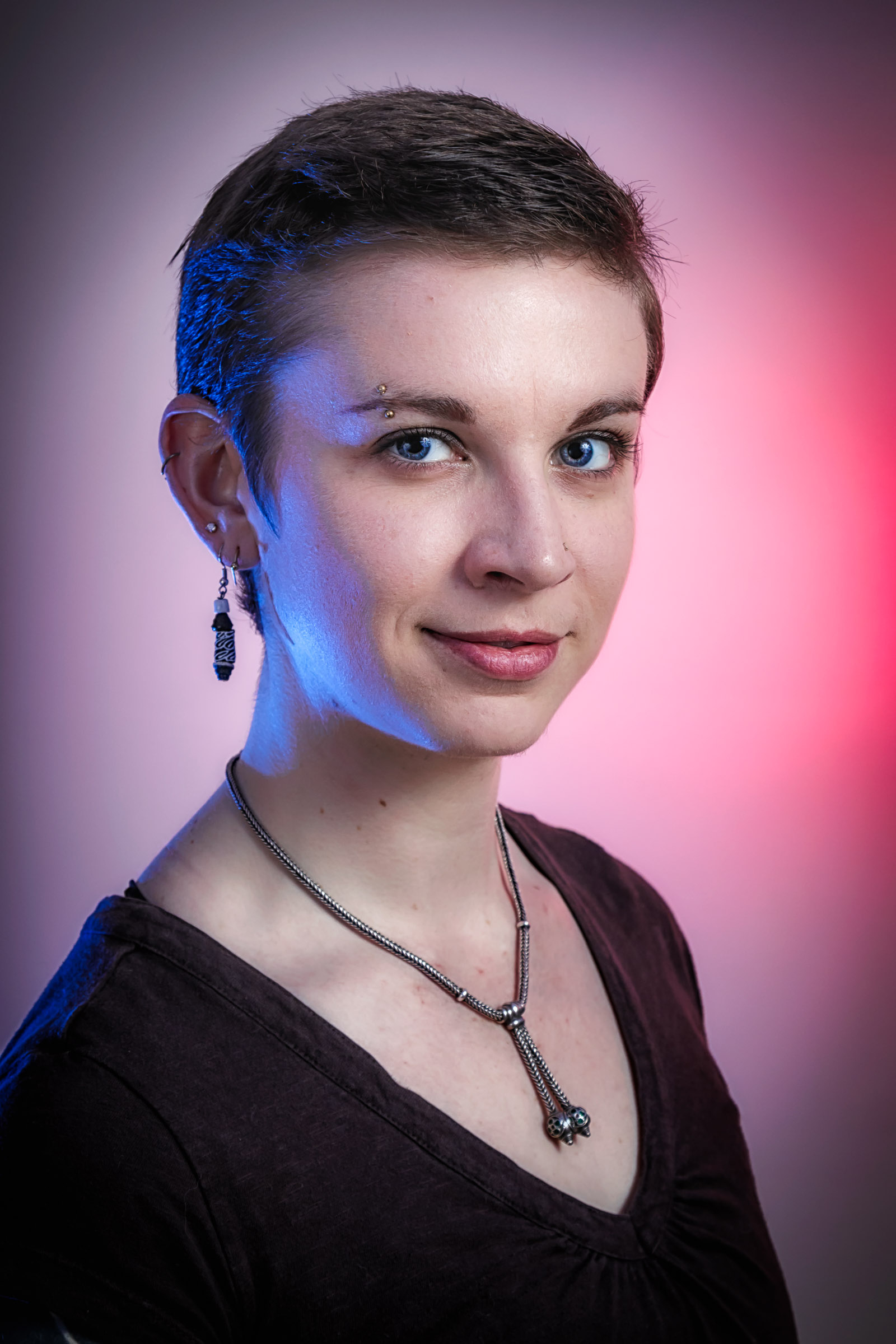 I was hired by my friend Hanna to take some headshots near Boston, MA for her massage therapy business, over in Brookline. We tossed some ideas around for looks, and mutually decided that it would be best and most time-efficient to begin with a somewhat conservative look, suitable for any corporate profile, before getting a little playful and creative with the photography.

I hadn’t seen the inside of her studio before, outside of a couple of smartphone photos that she sent that helped give an idea of color, so I was not certain where exactly we would set up for headshot portraits. Even though her studio space was relatively small, it turned out that her office had a large enough blank wall that I could use as a backdrop for portraits fairly easily.

I didn’t have a light meter with me, so I opted to use my camera’s histogram as a quick and dirty light meter. To the right are the lightest pixels, to the left are the darkest pixels. I also set up a manual flash on a stand and reflected umbrella to camera right (about 45 degrees from where Hanna would stand) and at about a 30-40 degree angle downwards as the key light. I marked a spot on the floor to act as a visual reference I could use to help guide Hanna where to stand, well away from the wall. Distance and angle of light would prevent any shadows from showing up on the wall in the portrait background.

This first test exposure shot shows the straight image off the camera and histogram based on the initial settings I chose. It gives an idea of the wall, and the kind of ambient lighting that was present.

The next shot shows what happened after I turned on the flash — my initial estimate was fairly mid to low strength, at 1/16th power. Of course, everything is over exposed: note the wall pushed to clipping white (the extreme right of the histogram shows it) while the black jacket is grey-ish (the left of the histogram confirms no black tones/shadows. It does not reach to the edge). At the settings chosen, I wanted to keep the aperture at f5.6, as it’s sharp for portraits on my chosen lens. If I increased the shutter speed, the ambient light would get dimmer but not subject exposure. The way light was hitting, there was zero ambient light registering — it was all wall/jacket subject exposure.

In the next shots, take note of the difference the black leather jacket and in the corresponding histogram. The blacks and shadows creep further and further to the left. Drop the ISO more, to 400, and the jacket is mostly black with the histogram nearly fully extended to the left.

At this point, I brought Hanna over to stand at the spot I designated, while I took a test shot or two at F5.6, 1/125th, ISO400, and flash at 1/16th power. Shadows and midtones are good (left and center segments of the histogram) and given the wall color (not white), there isn’t much white to expose for. There is the white thermostat to the left on the wall but it would’t be lit to white anyway, otherwise I’d blow out Hanna. Almost dead on, I’d say. Exposure can be pushed to the right as needed. Noise won’t become a huge factor in the shadows, since Hanna’s shirt has plenty of texture and Canon RAW files can withstand a lot of noise reduction before getting horrid detail loss.

One small factor that bothered me was the contrast between the lit side and the shadow side on her face. It was too dark, for me, and for the use I had in mind for her headshots, so I asked the RTMS2000 to hold a make-shift reflector to camera left in order to try and pop some light back towards the shadow side of Hanna’s face. Some difference, but not enough, so I set up a second flash with a shoot-through umbrella to the my 7 o’clock position behind me. Though it would be farther, and therefore a little dimmer, even at the same power setting as the key-flash at 1/16th, I wanted to still have a gentle transition between shadow and light across Hanna’s face, so I reduced the second flash to 1/32nd instead. A quick explanation, demonstration, directing, and tweaking of Hanna’s pose lead to the final shot. Some quick sprinkling of pixie dust in Lightroom, and she has a simple, conservative, headshot for use.

Noting that we still had some time to experiment a little, I incorporated a 3rd flash to about camera 10 o’clock, on a flash stand about waist height and pointing up towards her shoulders, with an impromptu snoot (a Rogue Flashbender worked perfectly!), but with a blue gel. I wanted the splash of color to rake her arms and back as a rim-light. I also bumped the shutter to 1/250th of a second, the maximum sync speed for my camera and flash. I wanted to lower exposure a tad for the background and bring more color out from the gels. By the next shot, I had decided to not use the Flashbender in favor of unmodified light with a relatively wide throw, and after adding a red gel, the third and final shot.

Headshots don’t have to be stuffy or boring!

There you have it, a headshot portrait photography session, on location at a small studio space, lit quickly and efficiently with a bare minimum of equipment, and making use of what is available in the environment. Realistically, this would be overkill if I were creating photos for the newspaper because it could easily have been done with just a single off-camera flash and umbrella.

Even simpler, I could have used on-camera flash set to eTTL modified with a black foamy thing and been done with it.

Instead, I used the extra time and assistance available to craft images that provided plenty of opportunity to experiment, relax, and bring out Hanna’s personality at a pace that was quick enough to keep from losing her interest and participation and efficiently enough that I wasn’t wearing myself out in the process.

Are you near Boston, MA and want to schedule a photo shoot together?

Please visit my contact page and send me a message so we can get started!

Want to see more of my photography?

My portfolio features the best of my headshot, portrait, event, and boudoir photography.