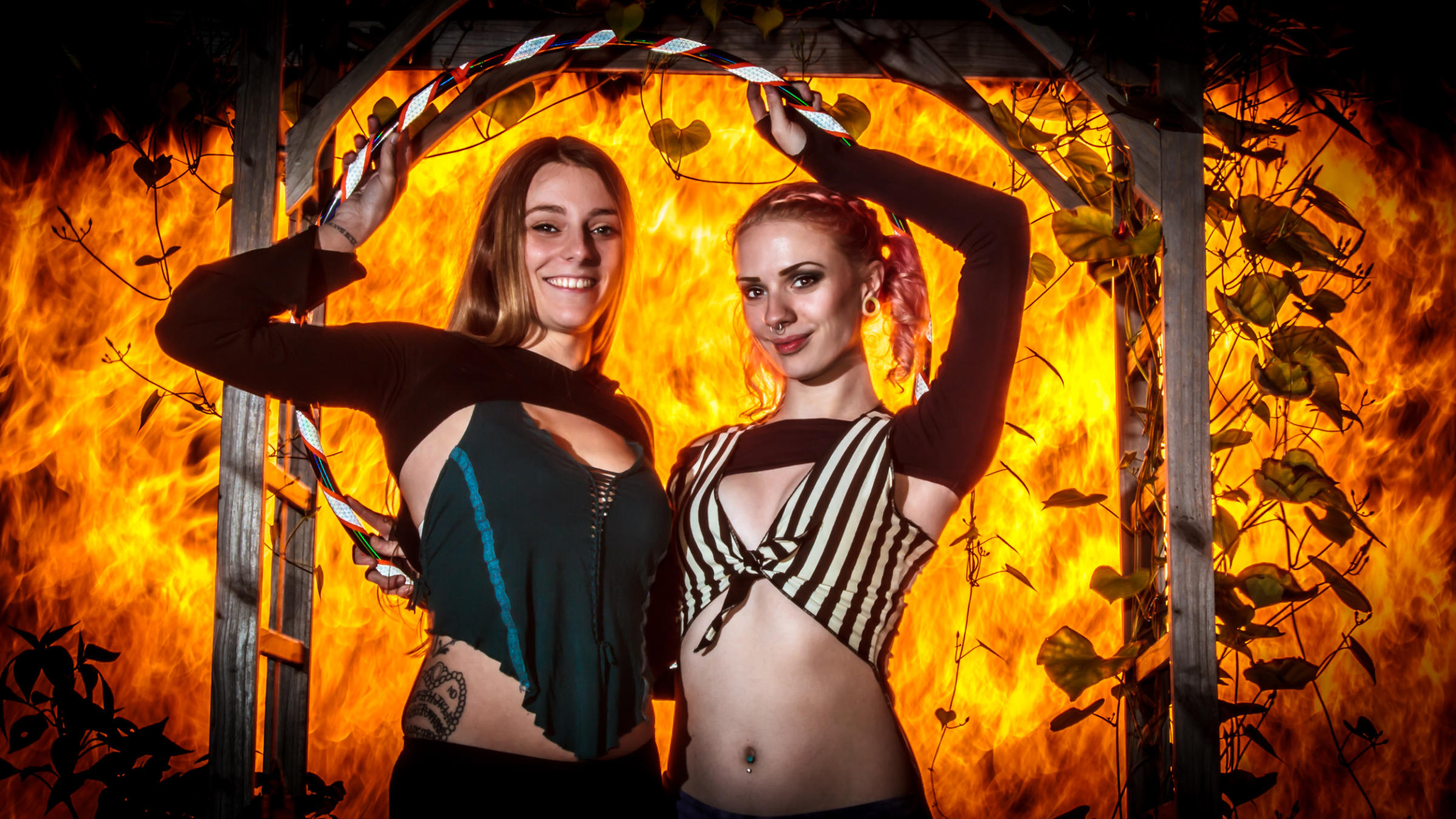 It had been a year since I photographed with Liz Arruda, owner of Apogee Flow Toys and thought it would be time to update both of our portfolios. A year ago we organized a model photo shoot at the Quincy Quarries during the day. This time around we organized a night time model shoot at her place. Of course, I wanted to involve fire, especially now that I was comfortable with creating a background of fire and could easily instruct and direct movement as required. As always, I had the RTMS2000 along to assist.

Shortly after arriving, I noticed a garden arch that would make a perfect frame for portraits and set up 2 unmodified speedlites: a key light to approximately the model’s 1 o’clock, with the 2nd around the model’s 8 o’clock. On the ground directly behind the model’s position I also set up a Milwaukee LED work light, provided by the RTMS2000. I wanted to make use of its 45 degree angle upwards throw from the ground as additional backlighting for non-fire shots.

Because I feel it is best to use two people for flow and safety when using fire for the background I gave Liz a run down of what to expect, physically walked through each step myself, and asked who felt comfortable lighting and walking with the fire and who felt comfortable safetying the Walker, receiving, and helping to extinguish the wick at the end of the exposure and assigning each task accordingly. We also walked through a couple of practice unlit shots to get the verbal commands and timing down.

I’ve worked with Liz and Samantha from last year’s shoot but Kayla was new and had never modeled before. I wanted her to get a feel for the over all flow (har har!), get an idea of how some poses would look, and get comfortable with hearing someone giving directions so I had Liz and Sam go before her. After a couple of test shots to nail down framing and tweak lighting we started shooting.

The most important thing for me to demonstrate, especially for a new model, was how respect and consent come into play. If I wanted a model to use a specific pose I would demonstrate the pose, myself, for them to mirror then fine tune with hand gestures and verbal explanation. If hair was in the way, I would ask if they would brush the hair off their eye or behind an ear, etc. If the things were close but still not quite where they should be, I’d ask if I could position the prop as she held it or ask if my assistant could help fix hair. Only when all other options are exhausted would I ask if I could help physically position the pose or brush hair away, etc., and always from the front, in plain sight — never from behind, out of their line of sight.

Don’t be a creep. Always get consent.

The pace for this shoot was a little quicker than my normal pace as Liz wanted to get a few shots in for Sam who had to leave relatively quickly after beginning. We would do an unlit portrait first, sometimes as a “test shot” (which often times is the real shot), sometimes as the real thing, with the second shot involving fire. The lawn arch worked perfectly and became a wonderful framing element and the second speedlight and LED work light helped to separate the models (who wore dark clothing) from the dark night time background.

This was not a shoot that required a lot of photos of multiple poses to get good results, especially with the time crunch we were under. I took about 63 photos and ended up using 26 photos. I’m more than happy with a 41% hit rate on keepers. ;D

So there you have it — a shoot that did not have a lot of time, had a lot of moving pieces, a brand new model broken in, we played with a lot of fire, everyone was involved in the creative process, models were excited and happy with their photos, and no one was injured, immolated, impaled, insulted, offended, creeped out, molested, assaulted, punched, arrested, or signed anything questionable.

I’d call the photoshoot a total success! Hopefully our next photoshoot together won’t take a year to happen.

If you liked this blog post, I’ve been compiling more of my best fire performer photography tips together. I hope you find them useful!