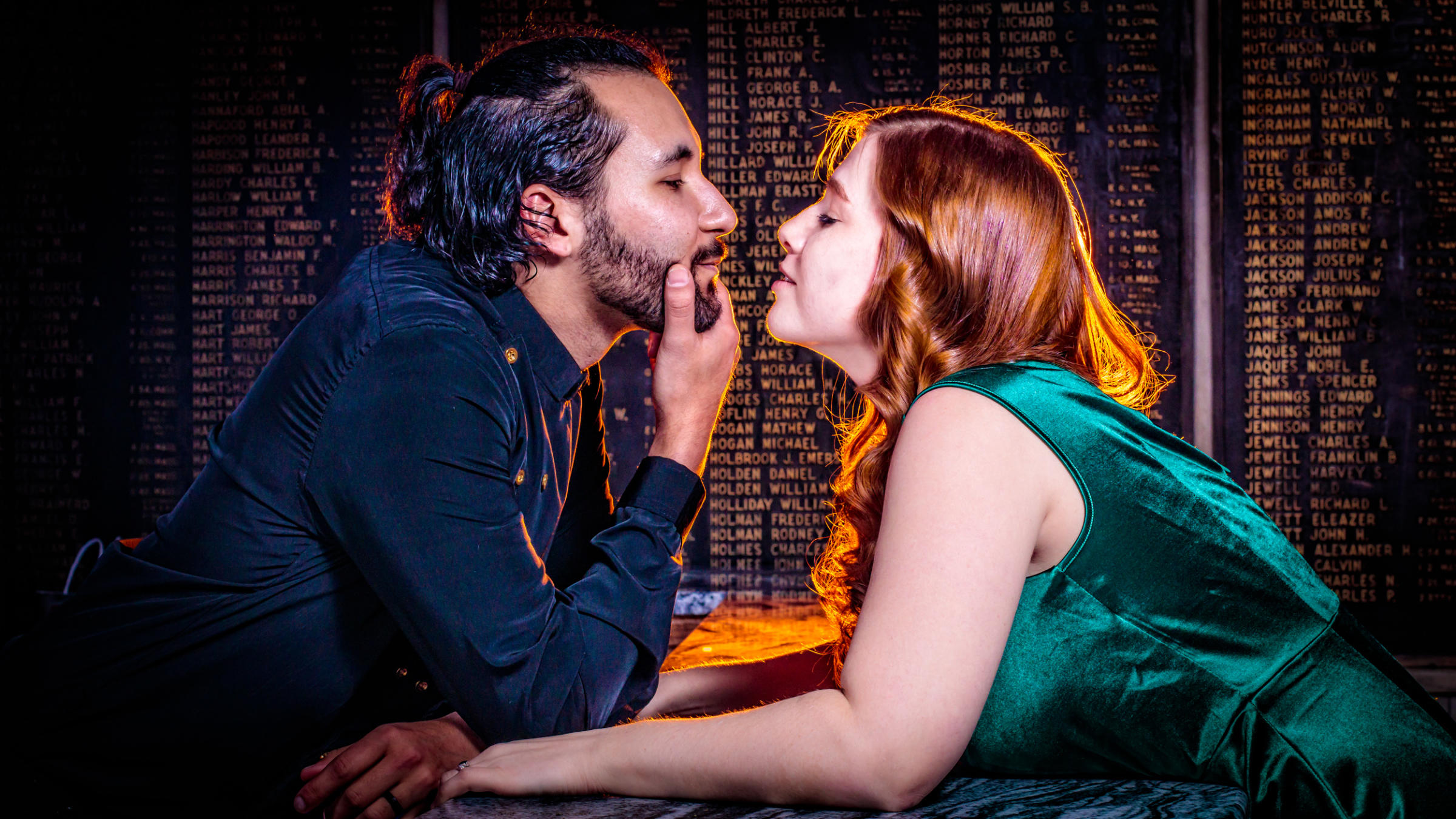 Bull Mansion was built in 1876, it was designed by Calvert Vaux who was contracted by Daniel Wesson (of Smith and Wesson) for his daughter Sarah’s wedding present. Bull Mansion is also known as G.A.R Hall (Grand Army of Republic Hall). It is an ornate Victorian Gothic/Stick style granite mansion, which is on US National Register of Historic Places.

2018-01-05 WORCESTER, MA – I was contacted to schedule an engagement photography session by a Lennen, a friend from my Western Massachusetts goth-club days, for him and Luna, his new fiancee. He would be flying in to Massachusetts during the holiday season and had some gothy/Victorian styled clothing that they wanted to be photographed in. After tossing about a few ideas, we felt that photography for their engagement would be perfect at an equally elegant location so I contacted my friend, Victoria, who graciously allowed us the use of Bull Mansion, a historic building in Worcester, MA that was originally designed as a wedding present and is now an upscale restaurant and event space.

We quickly worked out an affordable photography budget, took care of paperwork, and confirmed a date for photography while I started lining up resources that included a Felicia as a special effects makeup artist, on-call models for more conceptual images should the opportunity arise (thank you Bekah and Gabi!), a photography assistant or two (thank you Artemis and Kalomo!), and a potential second photographer by way of Connecticut wedding photographer, Courtney Robertson.

Of course, no one could have predicted that there would be a major snow storm the night before the engagement photoshoot and that temperatures would plummet on the day of the shoot itself. Unfortunately, it made things more complicated by changing the timing and freedom of availability for everyone. Some showed up later. Some could no longer stay as long as needed. Some could not make it at all. It’s winter in New England. Shit happens. Suck it up and drive on.

For this blog post, I got stuck here for a little bit about what to write next. I suppose that I could go on and on in several directions. Some may want to read about behind-the-scenes stuff and get into the nitty gritty of creating romantic engagement photos with multiple light sources in a beautiful venue. Others may wonder about contracts, how I got paid, how we juggled everyone, or the kind of equipment I used, feel that I edited too much / edited too little, lets chin-stroke over lenses, sensor resolution, dynamic range, and so on.

The most important thing I can pass on is that we somehow managed to find a way to pull everything together into a photography session that challenged us to find the best in what circumstance, timing, and other factors presented to us. When I could not scout the location the night before, I showed up earlier on the day of photography. When one person couldn’t make it, we lined up another. When another was delayed by brutal traffic, we shot photos anyway. When another couldn’t be there, we shifted roles to involve someone else. When people showed up, we worked them into the process. When we began running low on steam, we broke things into smaller pieces and decided to go all out for one final creative push. When the final concept proved too difficult for one person to pull off, we quickly organized into delegated roles and a by-the-numbers approach to photography. Together, we found a way to make it all work.

The romantic in me feels that there was something symbolic in the sudden challenges that came up out of nowhere to shake up the flow of plans we made and the correspondingly equal effort we all made to overcome them in the hopes of creating something beautiful. Engagement is the pinnacle of romantic idealism where more than one person makes plans together in order to create something unknown while hoping that what results is lasting and beautiful. Then life happens to challenge those hopes.

So what? Love each other, anyway.

In the end, storms will come. Delays will happen. People will drop out. Results won’t be what you expected. They may have even failed to match expectations. The Good Idea Faerie will pay a visit. Strong wills will clash. What else can you do, but react to the situation exactly as it has presented itself to you?

It is my hope that the images from this engagement photography session reflect the dedication of everyone involved, the challenges, the hopes, and the effort it took to create them and reminds the betrothed that they can find a way through anything, together.

So, congratulations, Lennen and Luna, on your engagement. May you have a beautiful life together. May you create something beautiful and lasting in the face of every challenge to come. May you have the support of a loving community, friends, and family with you every step along the way.

Behind the Scenes at Bull Mansion