While editing photos from my fire portrait photo shoot with Kayla Jane, I realized that I’ve described how I approach photography to other people as “instinctive” at this stage of the game. I always hate using that answer, as it feels dismissive, can be seen as a little uncertain, and somewhat pretentious all at the same time. The thing is that I’d never before thought about putting into words the thought process, the deliberate choices, and the actual photo editing that have become almost second nature to me. 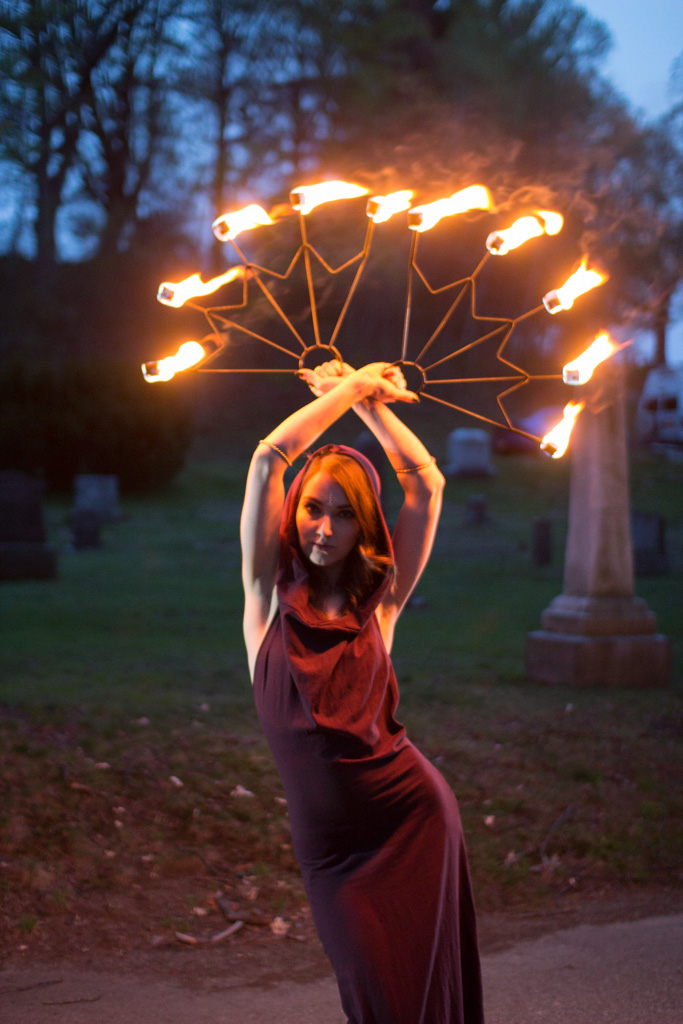 In reality, it fails to answer “why should I hire you as a photographer when I can just ask someone else to show up and take pictures? For free. Anyone can be a photographer, anyway, right?”

It also gives no explanation to the follow up question about why are my photography rates even what they are? Even if I am not asked these questions directly, or indirectly, they are often at the back of people’s minds whenever I end up talking about photography.

Soooooooooo, to justify my existence, below are all the factors I needed to take into account to create one image of a tribal belly dancer, modeling with fire, in a dark setting: 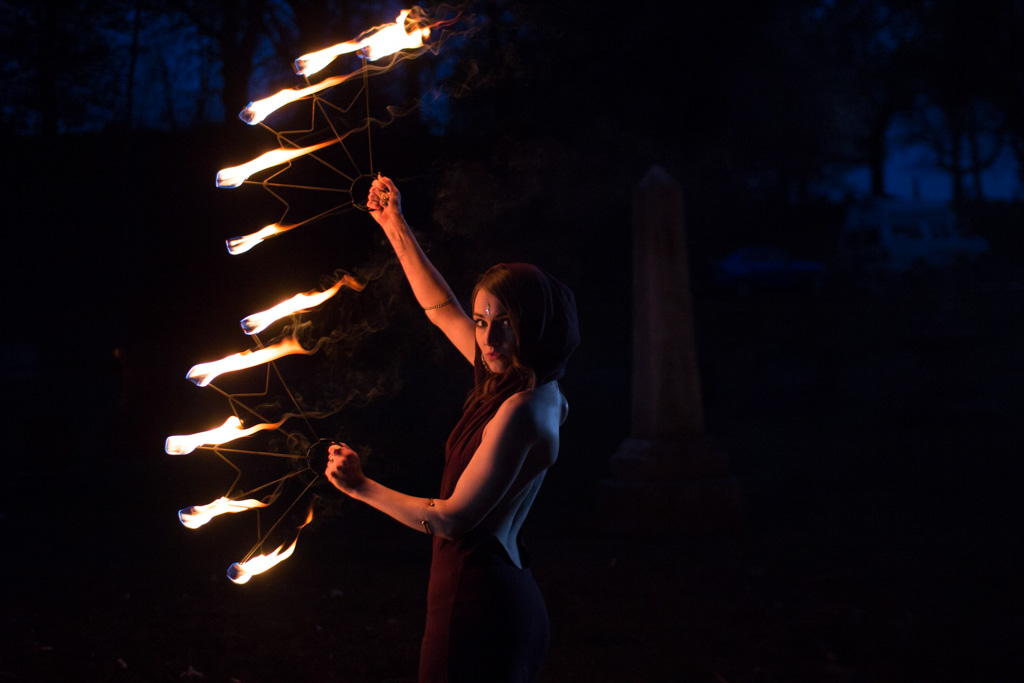 Original image, straight out off camera, with no adjustments made. Exposure was 1/320″ @ f1.6 ISO1600. Notice the rim light on Kayla’s back and shoulders? Without it, you would only see whatever was key-lit by the torches. 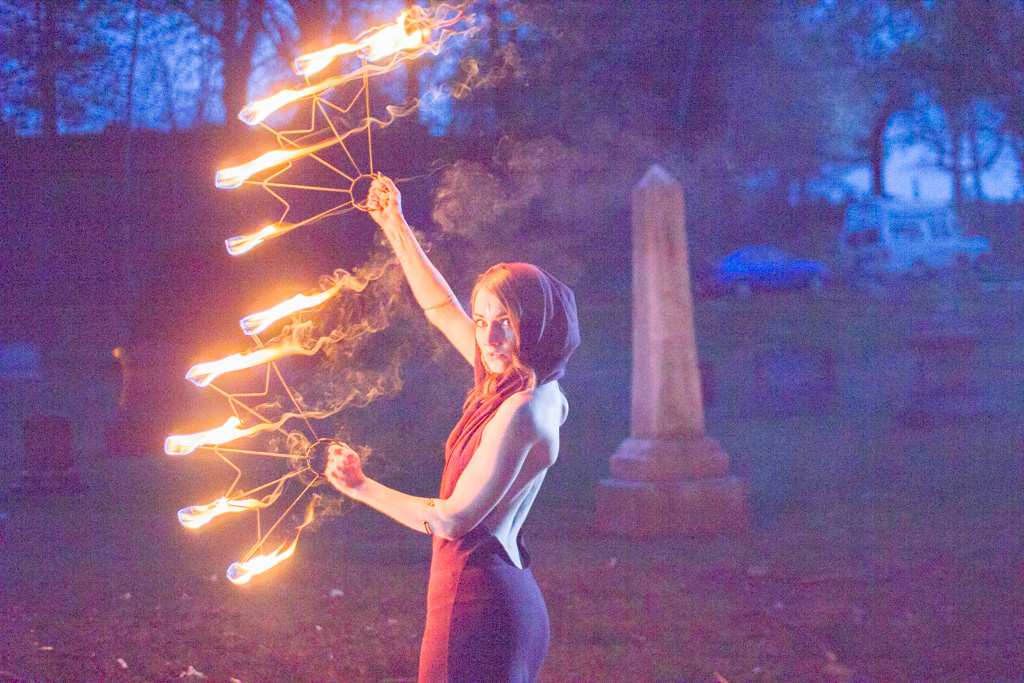 Image brightened up +5 Exposure in Lightroom. I brought Highlights down by -66 bring Kayla’s skin back. You can see all the distractions in the background, and the incredible noise levels as a result. 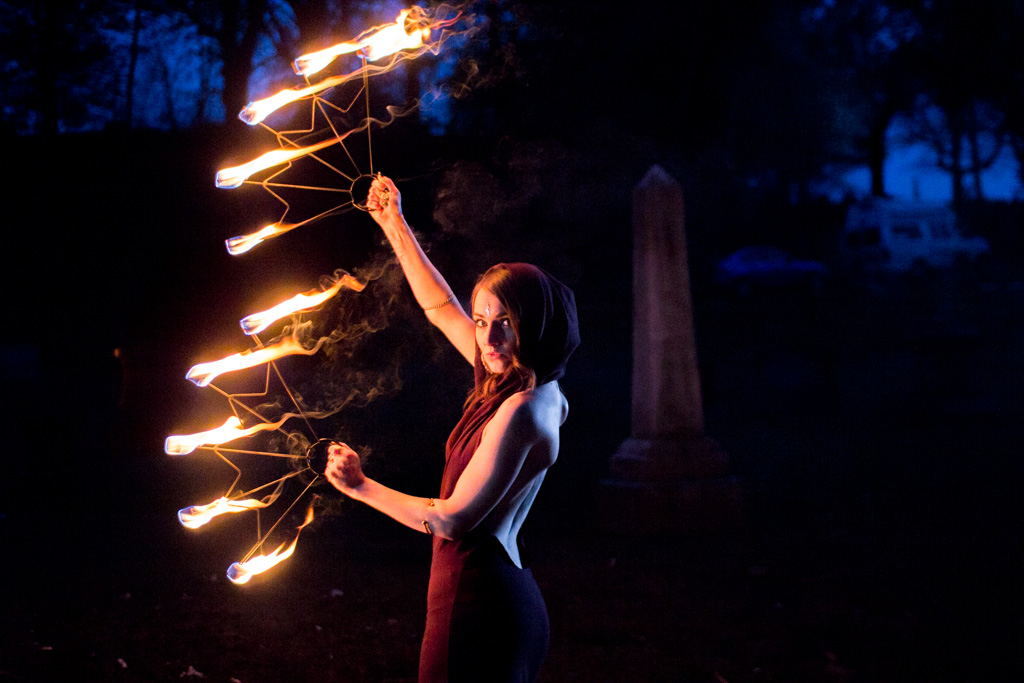 To bring the picture back under control and to start hiding distractions, I dialed Blacks +30, Shadows +70. Notice the blueish hue to the sky and the LED lighting on Kayla’s back? 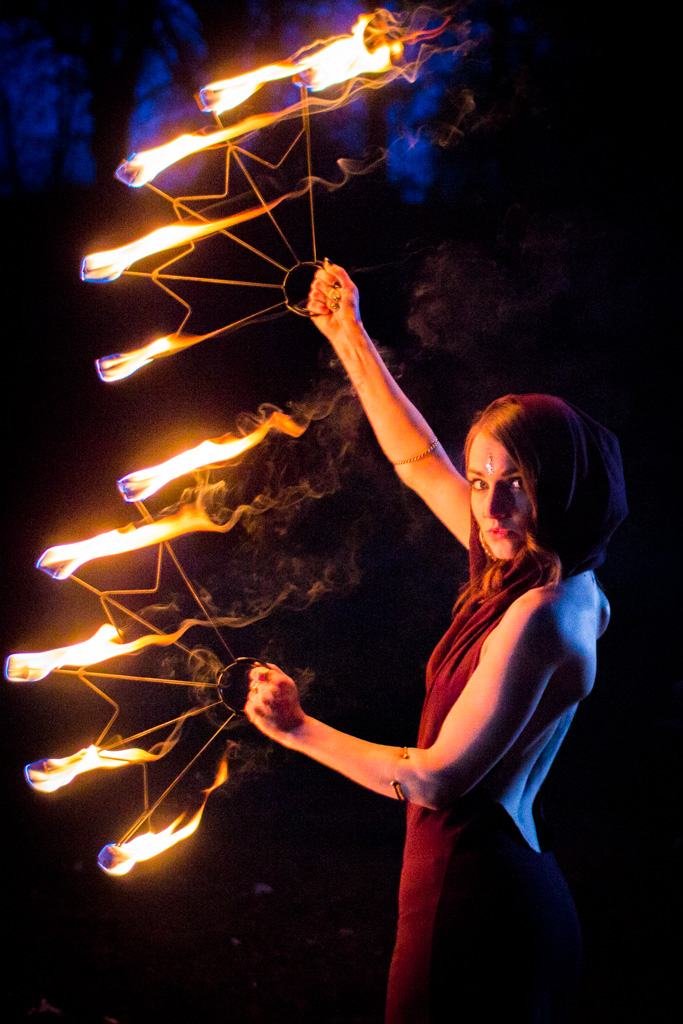 The vehicles were cropped out of the frame, and a vignette was added to provide additional darkening around the edges of the image. There’s hardly anything left to do to finalize the image, except for a little bit of cleaning up leftover leaves. 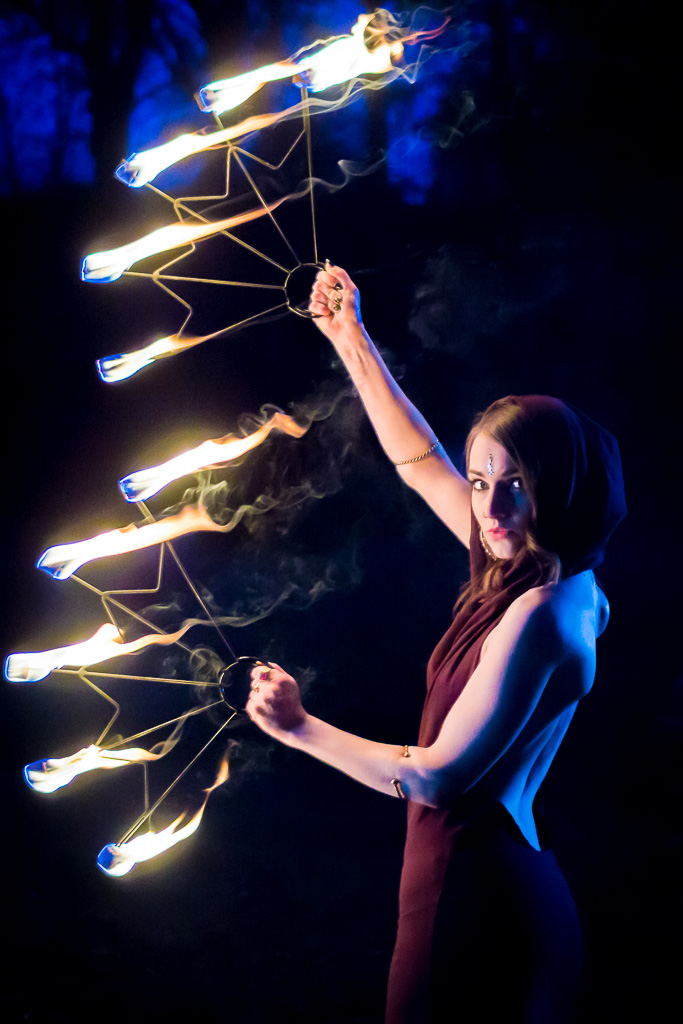 Color correcting adds blue across the entire image to cancel out the yellowish light cast, deepening the blue tones on her back and sky. The image was sharpened, noise reduced, eyes and lips touched up, and leaves cleaned up. The final image, was sweetened a tad more via one of my favorite plug-ins. 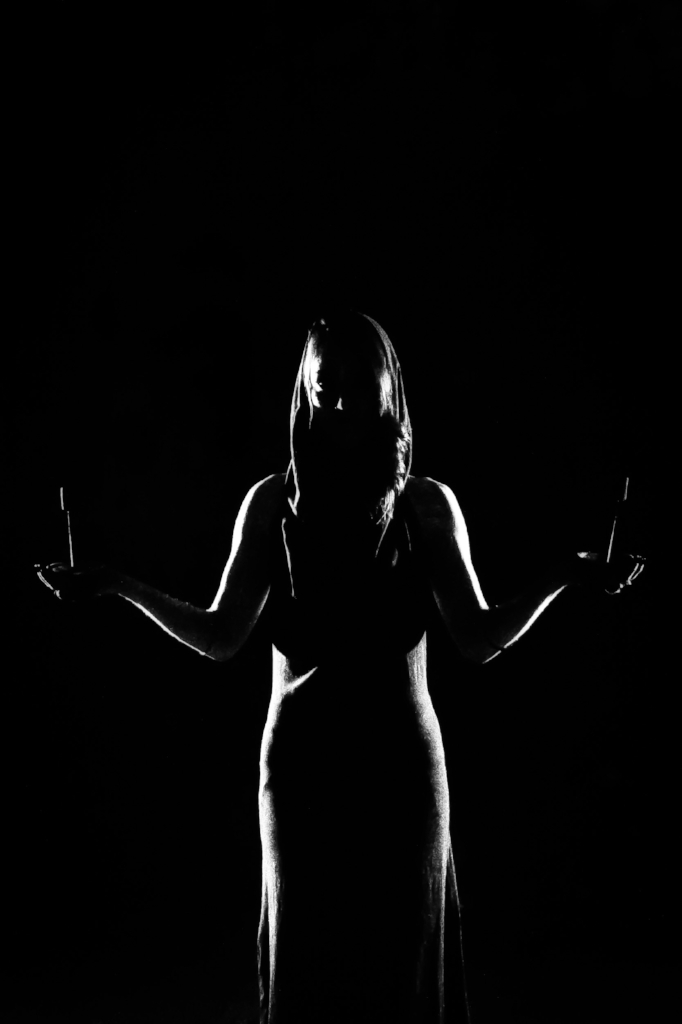 Earlier, I had Kayla pose in-between both LED lights, and took a heavily underexposed shot “test shot” in order to get a feel for what their placement would do. I also knew that I would end up keeping it.

For starters, I decided to have the hillside in the background but with some visible sky and a nearby tree. It helped to have some subtle breaking-up of what will become an almost purely black background with some color and shape.

I suppose that I could have the background more brightly exposed, but that would have shown all the leaves on the ground and thrown a lot of distracting lines from multiple branches, and tossed in more distracting background elements, like gravestones, to start with.

The problem is that in order to make that exposure, I’d have to use a shutter of about 1/40th while she was in motion, dancing. I did not want to risk blurring her movement. I could have frozen her with flash; however, it would have forced her to move in very specific ways, angled JUST right to be lit by flash modified and sculpted perfectly in order to achieve what I had in mind.

I chose, instead, to WAY underexpose the image with a shutter at 1/320th” for several reasons. Most importantly, it allowed me to freeze Kayla in motion in her most natural state. It also immediately removed the extra steps of setting up additional lighting and restricting Kayla’s dancing which would have added to both of our shared anxiety during the shoot. It also allowed me to minimize all the distracting elements in the frame. Using f1.6 pulled in enough light at ISO1600 to keep exposure on her face and skin within a reasonable range while using just the handheld torches as the keylight.

Shooting in RAW gave additional advantages when editing the final frame. Most importantly was the enormous leeway it gave in allowing me to brighten her substantially, push more distracting elements back into the shadows, and keep from blowing out her skin at the same time.

My current camera is a “consumer” grade APS-C sensor Canon Rebel T3i from about 2011 — the sensor has nowhere near the dynamic range and ISO performance as more “modern” cameras, especially recent model Sony based sensors which means that if I am in a dark environment I can either pick a faster shutter to freeze motion, which darkens the image, and push ISO to brighten it back up. The problem is that the lack of dynamic range and poorer ISO performance means that I am limited to how much I can really push things. For my camera, ISO noise is relatively clean at 800. 1600 is pretty much the limit for my camera, in these conditions. At 3200 and above noise tends to become atrocious for most darker shots.

If I started at ISO 100 and then tried to pull exposure up, I could only realistically gain about 1-2EV at the shutter speeds and apertures I was deciding to use before shadow noise, once again, would become a problem. Could I have gone +3-4EV? Sure, RAW allows greater latitude, but it would have been at the expense of greater noise and ultimately less room to keep details in the final edit.

Because of those limitations, I use very fast prime lenses (f1.8 and f1.4), since they take in an enormous amount of light compared to the stock kit lenses. (The better ISO performance and dynamic range of more modern cameras can help make up a little for the f3.5-5.6 range of cheaper zooms in lower light, by the way)

Since faster prime lenses help take in more light they give much more ability to use ambient light sources in darker environments allowing me to really concentrate on exposing for the person more effectively. Since I am starting with more light striking the sensor at once, I can pick faster shutter speeds to freeze motion, and set ISO higher to keep the overall exposure useful.

Another thing to consider is that by choosing to start from a position of underexposure, and knowing that I would be darkening the photo even more, I wanted a way to use light to separate Kayla’s dark dress and dark hair from the dark background without setting up Speedlites to do it. Additionally, I wanted the light to also provide illumination for safety third reasons, as she danced with fire but not to interfere with the final image. I also wanted to use the additional lighting to add splashes of color that worked with the little bit of sky that remained visible in the exposure.

So, again, a deliberate choice was made to use continuous LED video lights rather than the flash from more powerful Speedlites, for speed and flexibility. They provided just enough light to give a subtle rim of light around Kayla, backlit the smoke from the torches, and their slightly blueish daylight tone would become a much deeper blue once I corrected for the strong yellowish light cast by the torches. The addition of blue across the entire image to cancel out the yellow would also cause a shift in visible sky as it, too, took on a deeper blue.

So, can anyone be a photographer? Feel free to let me know.